To maintain a level of quality in the codebase, the project maintains a set of coding and testing guidelines.

The project uses Checkstyle  to enforce some of the formatting mentioned above. Violations will prevent the build from succeeding.

Recommended line-length limit is 80 characters, but it is understood if lines occasionally spill over this limit for aesthetic reasons. Chronic trespasses of the 80 character line-length boundary may fail the review.

Exceeding the maximum line-length of 120 characters will fail the build.

Javadocs are used to document the APIs of the codebase. Interfaces are heavily documented with Javadocs so that implementing methods (annotated with @Override) inherit the commenting.

Clarity of comments is important and therefore it is important to pay attention to detail and try to write concise, yet meaningful and clear comments.

Here are a number of Javadoc conventions that frequently need to be addressed in reviews:

For more information, see How to Write Doc Comments for the Javadoc Tool.

At the time of this writing, various formats are used within the code. 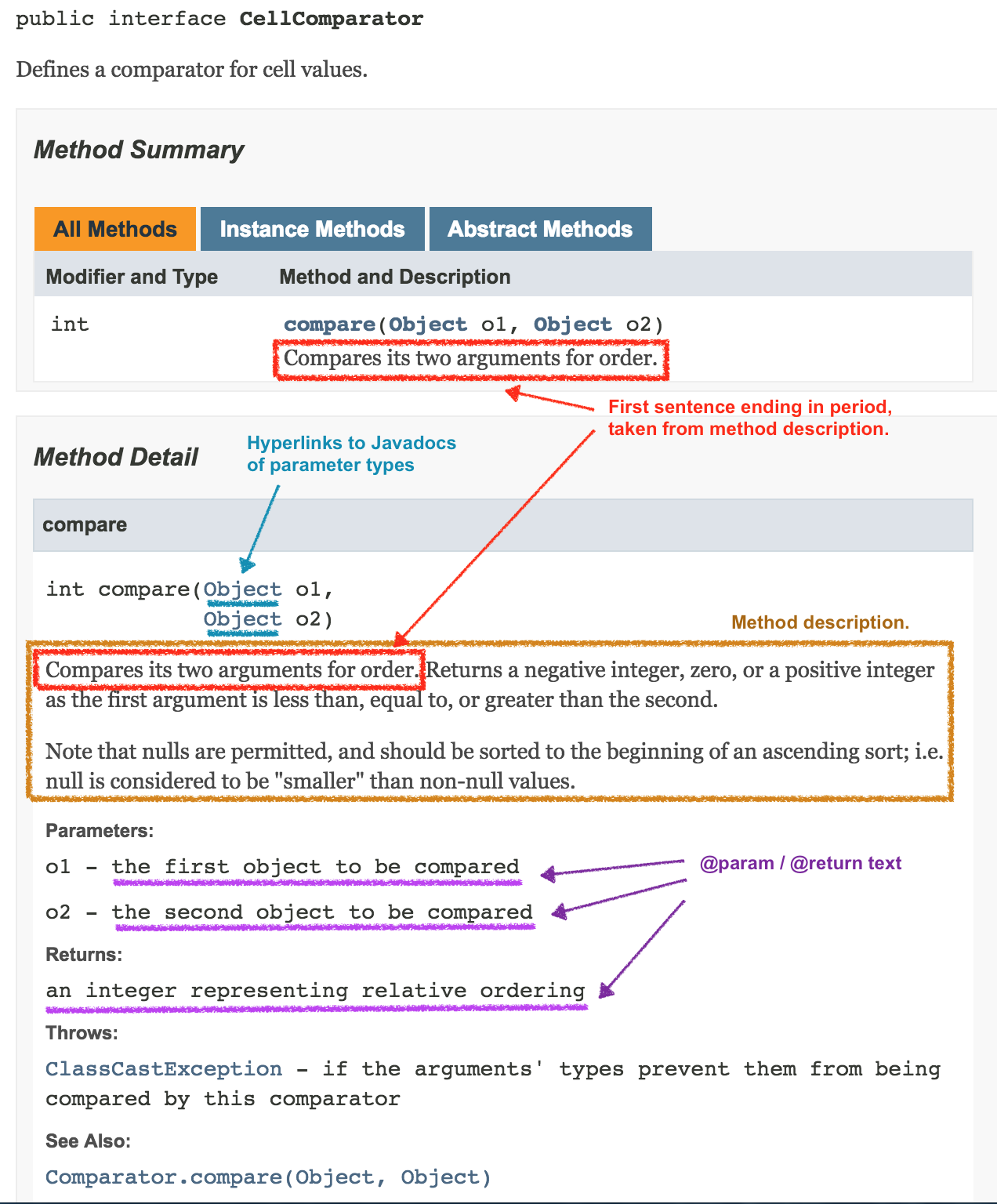 Interfaces should always be given first pick of clear names that convey their purpose.  For example, if there is an interface representing a network device, and a class implementing it, the interface should be given the name Device, and the class, something indicating that it implements the Device interface, e.g. DefaultDevice.

Class and interface names whose names are based on acronyms such as IP, PCEP, BGP, etc. should continue to follow the standard camel-casing convention, e.g. IpAddress, PcepService, BgpMessage. This maintains readability and avoids confusion between names of classes and names of constants. There are a few exceptions to this in ONOS code-base, mostly in legacy code; new code should adhere to the camel-casing convention, however.

Wherever possible, references should be made to the interface, and not the implementing class. This includes method parameters.

A class that implements functions specific to a particular class (e.g. its event handlers or services that it exports) should be implemented as an inner private class within the class. Such classes have names beginning with Internal-, e,g InternalClusterEventListener.

Wherever possible, use a rich data type over a primitive (e.g. MacAddress versus a long). This reduces ambiguity.

Collections (Sets, Maps, etc) returned by getters should be immutable, or a copy of the existing Collection.

Any objects that are compared, or stored in any hash based data structure (e.g. HashSet, HashMap), should implement these methods. For objects that implement them, comparisons should use their equals() method, and not ==. An exception to this rule are Enums.

Variables and parameters should not be gratuitously decorated with the final keyword; (This is an out-dated convention from Java 1.1 era). Let the Java compiler do its work of optimizing the code for you.

The exception to this "rule" is when the parameter is used as part of an anonymous class closure defined within the method.

The final keyword should also be used on class declarations to prevent classes from being extended. For example, utility classes or collections of constants.

On a related note, even though method parameters are not decorated with final, they should still be treated as final; it is considered bad coding practice to modify a parameter within the method. The same behavior can always be achieved with local variables.

The codebase uses SLF4J for logging. DO NOT use System.out.*.

The logger should be private final, and associated with the particular class:

When adding logs for debugging, rather than using info or warn, use the debug or trace verbosity level and set the log level in Karaf to inspect the debug messages.

When logging parameterized messages, use {} substituttion, not string concatenation. That is, do NOT do this:

Usage of Guava (More of a tools section topic)

ONOS leverages guava in several areas. Some prominent areas are:

Import statements are expected to be organized by the IDE. It is understood that different IDEs use a slightly different scheme for organization. Settings for both Eclipse and IntelliJ IDEA are available to minimize (but not quite eliminate) these discrepancies.

Duplicate and unnecessary imports will result in build failure.

Home : Contributing to the ONOS Codebase