Welcome to the SDN-IP tutorial!

This tutorial is designed to be an introduction to how SDN-IP runs in practice. We'll go through starting up a simple emulated network, and we'll see how SDN-IP controls this network to move data from place to place.

We've prepared a simple emulated Mininet topology, which contains 6 OpenFlow switches. Connected around the edges of the SDN network are 4 emulated routers. The routers run Quagga, which is an open-source routing suite. In our case we run the BGP part of Quagga on them, to simulate external BGP routers belonging to other administrative domains. The goal of SDN-IP is to be able to talk BGP with these routers in order to exchange traffic between the different external ASes. 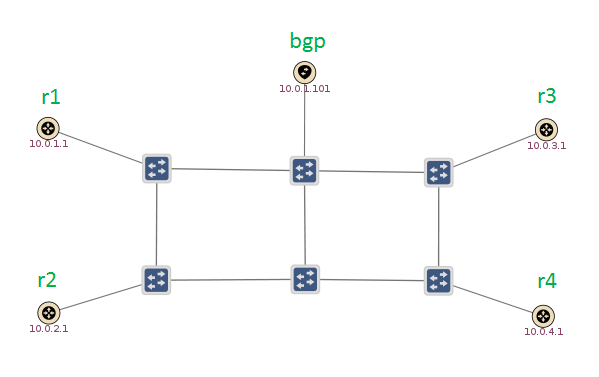 This figure shows the topology as observed by ONOS. We can see 6 blue OpenFlow switches, and 5 hosts around the edge.

We see a total of 28 intents. The 24 PointToPointIntents are simple end-to-end flows which allow the external BGP routers to communicate with our internal BGP speaker. The three MultiPointToSinglePoint intents are the forwarding rules for the routes that we've learnt through BGP. Each route is translated into one MultiPointToSinglePoint intent which matches the traffic for that route at the ingress ports of the network, and forwards it along to the router who advertised the route to us. This is how we use routing information learnt from BGP to enable traffic to transit our network on these routes.