ONOS is a network controller. Applications interact with ONOS through its intent APIs. ONOS controls data networks (e.g. an Openflow network) through its adapter layer on the southbound. In between, ONOS’ flow subsystem is the key component for translating application intents into Openflow flow rules. ONOS is also a distributed system and it is essential that ONOS' distributed architecture shows performance gains as its cluster size increases.  This evaluation takes an external view of ONOS as a clustering system and aims to characterize its performance from the perspective of applications and the operational environment.

We designed a set of experiments to characterize ONOS' latencies and throughput under various application and network environments. By analyzing the results, we hope to provide network operators and application developers with a "first look" of ONOS’ performance capability. In addition, the performance results should help developers gain insights for identifying performance bottlenecks and optimization opportunities. The following diagram illustrates the key performance evaluation points, viewing ONOS' distributed system as a whole. 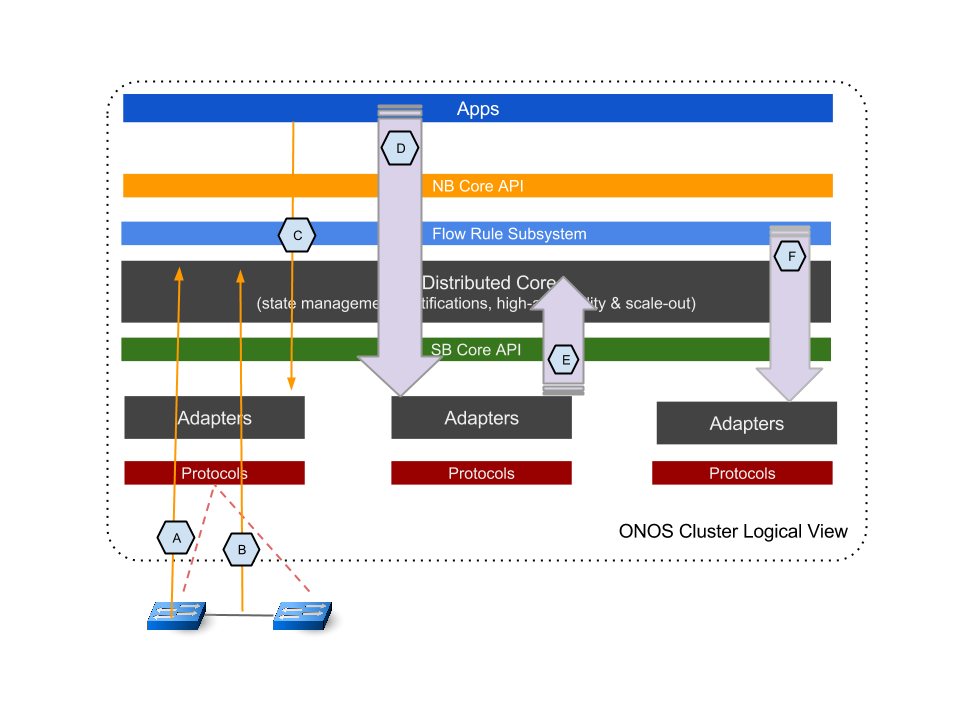 The performance evaluation points indicated in the diagram include:

ONOS’ most prominent characteristic is in its distributed system architecture. A key aspect of characterizing ONOS’ performance is to analyze and compare performance at various scales.  The general theme of all test cases is to make measurements on ONOS as it scales from 1 node to 3, 5, 7, nodes.

In order to characterize ONOS’ intrinsic characteristics and not to be limited by test fixture performance, we instrumented a few utilities for the experiments.

For all experiments except switch and port  related ones, which require Openflow interactions, we implemented in ONOS a set of Null Providers at the Adapter level to interact with the ONOS core. The Null Providers act as device, link, host producers as well as a sink of flow rules. By using the Null Providers, we  bypass Openflow adapters and eliminate potential performance limits from having to use real or emulated Openflow devices.

We also instrumented a number of load generators so that we can generate a high-level of loading from the application or the network interfaces to stretch ONOS's performance limits.  These generators include:

In addition, we utilize meters in "topology-events-metrics" and "intents-events-metrics" apps for some of the timing and rate related tests to capture key event timestamps and processing rates.

We will describe more details on utilizing the generator setup in the individual test cases.

A 7-node bare-metal server cluster is set aside for all the experiments. Each server has the following specs:

The following Child Pages will describe further setup details, discuss and analyze the results from each test.