NEMO language is a domain specific language (DSL) based on abstraction of network models and conclusion of operation patterns. It provides NBI fashion in the form of language. Instead of tons of abstruse APIs, with limited number of key words and expressions, NEMO language enables network users/applications to describe their demands for network resources, services and logical operations in an intuitive way.  And finally the NEMO language description can be explained and executed by a language engine.

NEMO has the following features:

We can also find the following network domain intents:

We can generate the following OOR (Object-Operation-Result) model for the intent expression according to above network examples.

There are two patterns for intent expression: the Object+Operation and the Object+Result. On the network service layer:

To impellent this feature in ONOS, we need to develop two modules.

One is the NEMO editor in Eclipse. It can implemented as an external application. It will provide functions like syntax check, and auto complete. It also encapsulates the NEMO script into the REST API.

The other one is NEMO language engine. It will be a new internal application in ONOS platform. It parses the NEMO script and interacts with the ONOS core, and call the core APIs to execute network control. 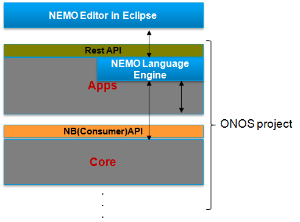 This is an example of using NEMO language to create a hybrid cloud.

Implement the rest of the functions of NEMO engine, including tenant space management, NEMO intent resolver and VTN and SFC drivers.