The purpose of this test is to characterize ONOS' intent installation, withdraw and re-routing latencies as the cluster size scale out from 1 to 3, 5, 7 nodes. In order to have a high performance distributed system, a single-node ONOS should have low latencies. As we scale the cluster out, we expect there are additional distributed system overheads for communicating with all other nodes; however, such overhead penalties should not be so high as to detriment performance significantly.

The main parameter to control how distributed the intents need to be is by the assignment of the switch masterships. We maintain a linear 7-switch topology as the base topology (an eighth switch is used for re-routing test). The switch mastership assignment will depend on the number of nodes in the cluster, for example, when testing a 1-node standalone ONOS, this ONOS is the master of all 7 switches; when testing a 7-node cluster, each ONOS node will be master of one switch, etc.

We use a build-in ONOS application "push-test-intents" as a tool to push various sizes of intent batches (point-to-point intents) and obtain the returned response times of "install" and "withdraw". Only ONOS1 is used to push the intent into the cluster as we scale out. The point-to-point intents are between ports of the first and last switches of  the linear topology. Therefore we maintain a constant path for all intents as we scale out.

Timing synchronization among the nodes is kept by running ptpd on all nodes. 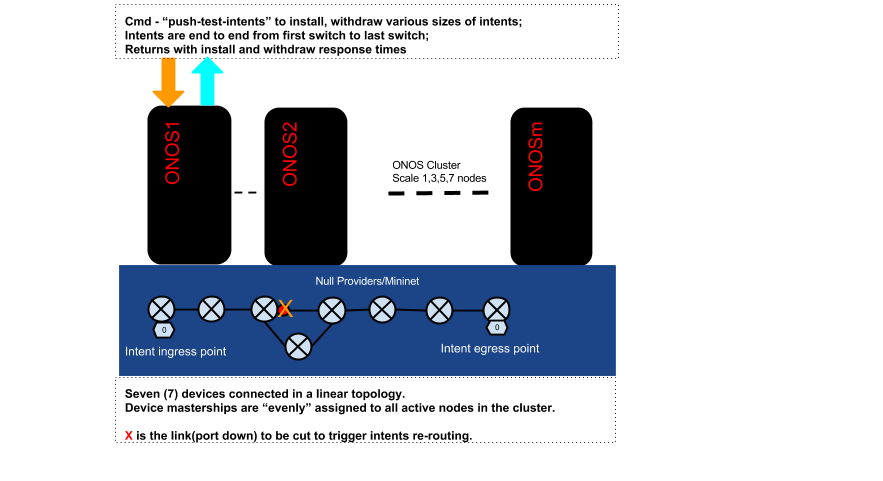 We use the same setup in the previous test. In order to stimulate re-routing of Intents, we cut the shortest path in the mininet topology (or activate the link-cut link description file, if using Null Provider)  and cause all previously installed flows to be re-routed to the newly calculated path. Given a sufficient wait time, we use the "intents-events-metrics" to record the latest to intent event as the completion of re-route.