A Beginner's Guide to Contribution

Trying to get involved in an open source project can feel like a daunting task. This section provides some suggestions and pointers to make this jump smoother for those who want to get involved.

Submitting code as a developer is certainly a way to contribute to a project, but not the only way. There are many aspects to an open source project where contributors can help, including (but not limited to):

These roles are fluid - any work that modifies the system will need to be tested and documented, and documenting an aspect of the system or its usage may involve reading, running, and testing pieces of code so that you can understand them well enough to write about them.

First and foremost, anyone interested in contributing in any way should join onos-discuss. This is the primary mailing list for general questions and discussions. There are several other mailing lists that you may want to join, such as onos-dev for ONOS developers.

As one of its tasks, the project maintains up-to-date tutorials for both users and contributors. In general, those interested in contribution should at least complete the Basic ONOS Tutorial, as it introduces many of ONOS's features.

In addition to the tutorials, the ONOS Documentation Set provides guides describing various aspects of using and developing on ONOS, as well as its architecture and API documentation (Javadocs). For developers, the recommended way to use the documentation set is:

Contributors begin as submitters, and may progress to committer status. In a similar vein, contributors may work on the existing ONOS codebase and use cases, or, with approval of the technical steering group, introduce their own work as a sanctioned project. ONOS Governance describes the project model that the ONOS Project follows in further detail.

The ONOS Project is a composite of the ONOS SDN platform itself and the various projects using it (applications and use cases). Information about the ongoing projects may be found on [Projects]. Many of these projects will have an Epic associated with them so that the tasks associated with them may easily be found, as described in the next section.

Finding Tasks to Work On

The ONOS Project keeps track of various tasks with JIRA. In specific, we maintain a category for tasks, labeled as "Starter", which have lower barriers of entry. These Starter tasks are intended for newcomers to the project that wish to work on existing material.

More information about searching JIRA can be found in Finding, Claiming, and Working On Issues.

Proposing a new project or task

Anyone can approach the mailing lists with project ideas and proposals. For example, if a developer has written a new application or a provider for a new protocol, and wishes to contribute it back to ONOS, it is a good idea for them to drop a line on the mailing list for feedback and further suggestions, rather than to submit a pull request without a warning.

Sometimes, you may be asked to file an new task/issue or subtask, based on a conversation you had on a mailing list.

To create a new issue, take a look at this page. To create a subtask from the Work view, click on a task, and in the side panel, go to the button on the upper right corner (...) > Create Sub-Task: 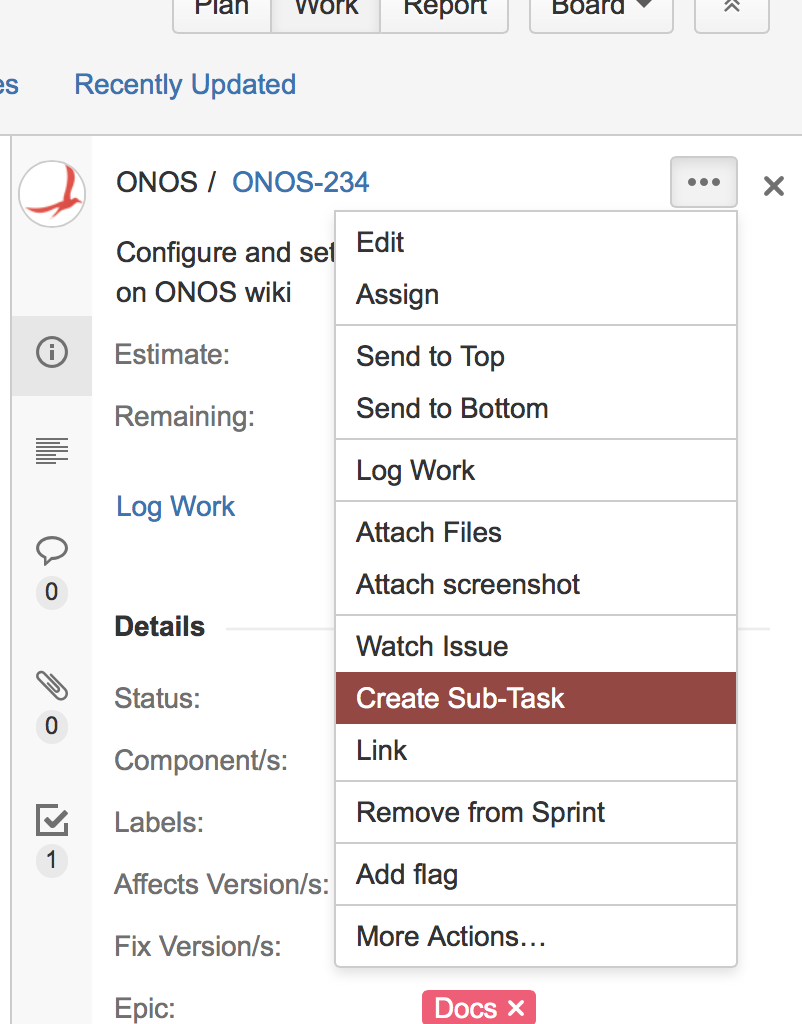 This will bring up a form similar to the Create Issue form described in the aforementioned link that can be filled out.

If you are working on a task, and are stuck, don't be afraid to ask questions - it's certainly in everyone's interest to move the project forward! However, please be sure to search existing documentations and mailing list archives before doing so, or the response you get may consist of a link to a page or something similarly terse. Likewise, If you have log files, or steps for recreating an odd behavior, attach or mention those to your question as well - Just saying "It's broken" without the specifics will just result in a response asking for those materials.

Return To : ONOS for Newcomers