As aforementioned, the flow subsystem is the integral part of ONOS that functions to realize the Intents into flow rules that can be installed onto Openflow switches. In addition, applications can also directly call on its API to inject flow rules. It is in the critical path of the performances when applications use the Northbound API and the intent framework. This experiment should provide us a with additional performance breakdown from the end-to-end Intent performance, as well as what applications can expect when directly interfacing with the flow rule system.

For generating a batch of flow rules to be installed and removed by ONOS, we use the "flow-tester.py" utility that is implemented as part of the ONOS tools (under $ONOS_ROOT/tools/test/bin). This tool when executed will cause ONOS to install a set of flow rules onto the devices under controlled. It returns a response time when all flow rules installed successfully. The tool also accepts a number of parameters to vary how the test can be run (see help page on the command for more details):

The following diagram depicts the general setup. The example setup in this diagram shows ONOS1 and ONOS2 are the two servers running the tool to generate flows; when both server generating flows with two Neighbors, i.e. the flow rules generated are to be pass to two neighboring nodes for installation (because the flows belongs to switches with neighboring node masterships.) 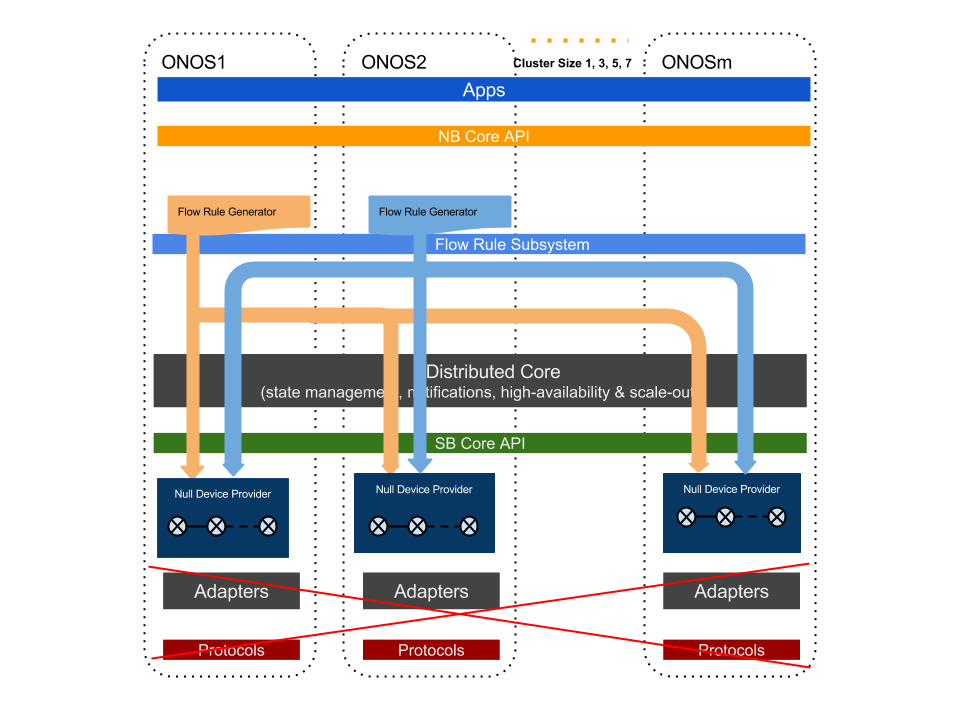 We enable Null Providers to be the consumer of the flow rules, bypassing Openflow Adaptors and the potential performance limitation of using real or emulated switches.

Specific to this experiment we run for this release, we use the following parameters:

Note: At the time of release, ONOS core still utilizes Hazelcast as the store protocol for backing up flow rules. Experiments showed that using this back up can cause high variation of the flow rule burst install rate. In this experiment, we run this set of experiments with flow rule backup turned off from the released code (under "$ONOS_ROOT/core/store/dist/src/main/java/org/onosproject/store/flow/impl/DistributedFlowRuleStore.java)

A few system performance conclusions can be drawn: