This page hasn't been updated in a while and may contain inaccurate information.

This section presents an overview of the Packet Optical use case.

This use case may be summarized as a packet-optical SDN implementation for Wide Area Networks. Included in this use case are aspects such as multilayer network abstractions in SDN, and a packet-optical bandwidth-on-demand (calendaring) application, and refinements to ONOS’s northbound API for orchestration, data layer configuration, and elastic and flexible optical transport networks visualization.

The figure below represents a sample POC environment: 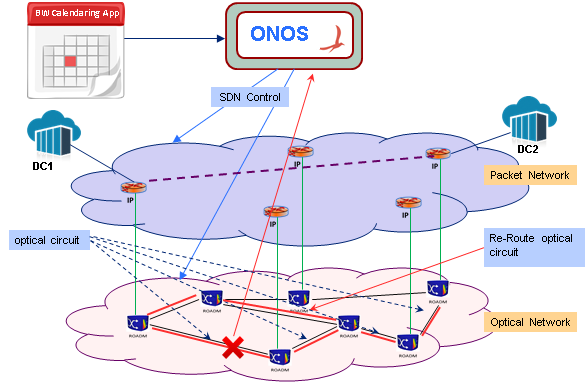 Service Provider Networks are complex and multi-layer in nature. Each of these layers, including packet and optical, is provisioned and managed independently. Sometimes, the provisioning and adding of capacity or new services requires order of days if not months. A converged SDN control plane for packet and optical networks can help address all of these inefficiencies. Service providers can optimize across packet and optical layers in real-time for availability and economics, thereby reducing over- provisioning. They can add capacity based on traffic and other considerations in minutes instead of days or months.

Typical optical transport networks are made up of ROADMs (Reconfigurable Optical Add Drop Multiplexers) that switch wavelengths and sub-wavelengths (OTN). Today, multiple IP layer connections are carried over the same optical wavelength that is very static in nature. In such static transport optical networks, adding optical capacity is a highly manual task that requires physical fibering of tunable lasers to the correct port.  Adding on-demand connections or shifting capacity must be planned well in advance, and at significant operational expenses.

Additionally, due to the highly inflexible nature of current transport networks, a great deal of spare packet and optical capacity is deployed to cover all possible failure points. This is combined with the need to support busy hour scenarios with overcapacity to minimize packet loss. The daunting task of Traffic Engineering (TE), such as the capacity planning process, must consider all possible traffic load and failure scenarios because the optical network cannot be reconfigured at will. Optical impairments are complex and require careful planning and traffic optimization practices. For example, optical "Reach" must be carefully considered when paths are set up by the path computation elements/Engines. ONOS not only abstracts the converged network graphs, but it also maintains the resources such as re-generators and link utilization.

For example, the figure below represents where re-generators are potentially applied to extend the reach: 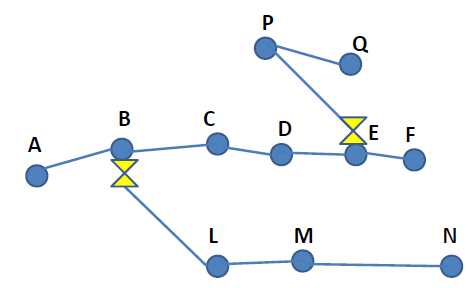 Our goal is to show a sample POC environment in order to demonstrate multilayer SDN control with ONOS. This use case shows:

In other words, the packet-optical SDN use case aims to provide WAN operators with real time on-demand network programmability. Specifically, this use case presents a bandwidth calendaring service built as an ONOS application to make service requests.