This use case is concentrated on deploying SDN on the send side of a production network.  In later phases (Use Cases), we will concern ourselves with SDN on the receiving edge and later SDN in the core (i.e. a complete SDN network).

I suspect incremental deployment will be the case for many large production networks, since a forklift change is simply too risky and unrealistic.

Check the following resource that describes the Multicast Forwarding Architecture 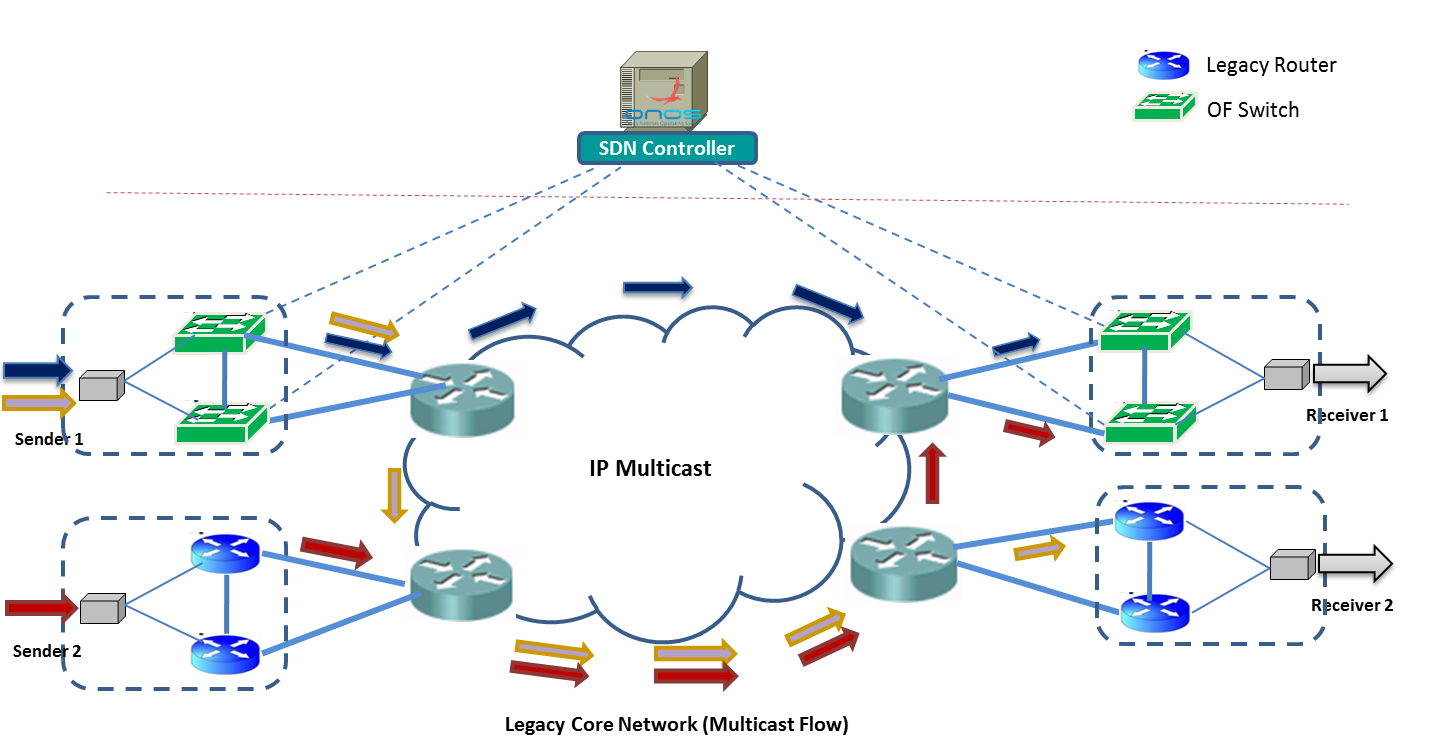 This use case, we are assuming PIM-SSM for multicast as well as a legacy unicast routing protocol.

This use case assumes a high volume production network so it is only prudent that sections controlled by SDN are rolled out gradually in the early phases until we have sufficient confidence with the solution in our production environment.

The plan at the moment of this writing is roughly:

Rolling out SDN in phases means that we'll be creating sections of SDN adjacent to legacy L3 sections. routing protocols.  This will create sections of the network that can not communicate directly with one another, therefore we'll need to determine a way to consistently pass traffic through the SDN / L3 borders while supporting redundancy with primary and backup paths, while avoiding loops and duplicate traffic.

The first phase covered in this USE case will be looking at solutions to replacing the sending side of the network with SDN. The initial deployment may include a hybrid deployment meaning that the OpenFlow and Legacy L3 border will exist in a single switch.

There are least the following options that may solve the Ships In The Night problem:

In our use case we will work toward solution 3 for multicast, that is create a PIM-SSM emulation mode.  Unicast routing will need to be solved in some other manner that we will need to determine.

Perhaps the most robust way to solve the Ships in the Night problem will require the ONOS controller to understand and speak PIM. This does not mean that we are going to implement all of PIM-SSM as a controller app, rather we provide the controller with just enough smarts to interpret PIM messages such that it may create sufficient forwarding state on our OF switch.

This specific use case requires us to emulate PIM-SSM. This will require ONOS to understand PIM Join / Prune messages to determine which ports PIM-SSM expects to receive data from.

In order for PIM-SSM to send a PIM Join/Prune to an OF switch, we will also need to periodically transmit and read PIM Hello messages that will allow the PIM Router to form a neighboring adjacency.

For unicast routing we don't have quite as clear of an option.  Perhaps solutions 1, 2 or 4 above.  We also have an option of Introducing iBGP or running a switch in hybrid mode reducing redundancy to a single path, or perhaps to create a series of redundant static routes to still afford redundancy.

Conceptually speaking: multicast is inherently different than unicast forwarding in that every unicast address is unique and has exactly one location within the network (with the rare exception of IP anycast).  Multicast addresses, used by hosts to consume data from a specific group can come and go in various areas of a given topology over time.  That being the case, there must be a away for host group interest to be communicated to the network.

For a host to receive multicast data for consumption an SDN controller must be able to discover interest.  That interest may be discovered in one or more of the following ways:

Many of these are analogous to the unicast methods mentioned above.

During early development of this phase we will require, at minimum the static configuration of group addresses and egress ports to indicate end receivers of the given multicast address.  Conceptually speaking the configuration items will be something like:

This should result in outgoing state stored in ONOS that can later be combined with an active group source and associated incoming port to produce one or more multicast paths through the SDN core.

Due to the fact that ASM by nature does not include a source address, it is impossible to know what source and / port, therefore ASM forwarding is data-driven and hence the flows must be added reactively.

We'll talk about reactive forwarding in a bit.

Unlike Static ASM, Static SSM flows can be added proactively, as well as reactively.   Since SSM tells us the source of the traffic, and possibly the group, it is possible to proactively add multicast flows to a switch before any data starts to flow.

SDN has enabled the concept of Reactive Forwarding in unicast networks, where the controller establishes the path between two hosts (or any device for that matter) after data has been sent from one device to another.  Traditional unicast networks (built with legacy routing protocols such as OSPF or BGP) don't work that way, forwarding state to all reachable destinations is established proactively.
Multicast, on the other hand, has traditionally been "data driven", meaning that for the most part, not established in the router until after data arrives (it also will typically time out).   This is largely because ASM was the main problem initially solved by the original protocols (mrouted, pim-sm & pim-dm).

Reactive Forwarding is Required for ASM

For Any Source Multicast (ASM) theoretically any source could start and stop sending at any given time.  That being the case, it is not possible to proactively install the respective intents until after the sender starts sending.  ASM, however is not part of this use case to this will is not a requirement we need to worry about at the moment.   Another use case, this may be important.

By reactively populating multicast state, you have the positive side effect that the forwarding tables in a switch only contain state for active (or recently actively) flows.  In other words, the switch does not have to store 100% of all possible state if only 10% of that state is active at a given time.

I think it is worth considering a "zero configuration" setup.  In a case that a network has a large number of multicast groups being generated from various "sending" edges.  Reactive forwarding could potentially simplify configuration management.
Overview
Content Tools
{"serverDuration": 68, "requestCorrelationId": "7dfded36ffa8918d"}