This document describes a network policy framework (NPF) for ONOS, including its design, implementation and operation. The purpose of this NPF is to provide an abstraction layer that hides the technology-specific details of the control and data planes by providing a human-readable interface that simplifies the enforcement of low-level and technology-specific actions to the network (e.g. installation of OpenFlow rules, constraint monitoring, etc.). This prototype is integrated into the ONOS SDN controller and it is responsible for translating generic policies received through a dedicated REST API into OpenFlow (OF) flow rules.

This work has been performed in the framework of the NGPaaS project, funded by the European Commission under the Horizon 2020 and 5G-PPP Phase2 programmes, under Grant Agreement No. 761 557 (http://ngpaas.eu).

The source code of the Network Policy Framework is currently available at:

The NPF was designed to support platform-wide and technology-agnostic policies. To this end, a policy model and a policy life cycle were defined. The former allows defining policies in a generic way regardless of the underlying technologies, while the latter defines the possible states of a policy as well as the logic to move from one state to another. These two concepts are summarized hereafter.

The set of Policy Conditions of a Policy Rule are represented as a 2-dimensional list, as illustrated in Fig. 1. This can be treated by the framework in two different ways:

Note that any set of conditions expressed in CNF can be converted to DNF and vice versa. This is interesting because a policy expressed in DNF can be directly mapped to a set of flow rules as follows:

-        Each condition clause corresponds to a flow rule, where

-        Each condition corresponds to a parameter of the traffic to match

Note that the current version of the Policy Framework does not supported negated conditions when defining policies.

The Policy Lifecycle manages the state of the network policies based on three validations: formal, context and conflict. The formal validation analyzes whether the structure of the policy is valid or not. The way it is analyzed is specific to the type of policy being pushed; however, a structured way would be the following:

The context validation analyzes if the resources involved in the policy are available or not. This analysis also depends on the type of policy being pushed. However, there are 3 different scenarios:

The dependency between Policy Conditions can be better understood with an example: 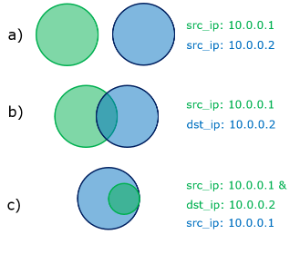 Two policies that define source and/or destination IP addresses as conditions are analyzed in 3 different scenarios:

a)     Both define a different source IP address so both conditions are independent.

b)     One condition defines the source IP and the other the destination IP. Applying the definition of independent policies, we see that they are dependent. In case we have traffic going from 10.0.0.1 to 10.0.0.2 both policies would match it.

If, and only if, a conflict has been identified by the previous step, then the Policy Resolution is called by the framework. In order to resolve the identified conflict, the framework utilizes the priorities assigned to each of the conflicting policy instances. Given a conflict, one of the following scenarios can take place.

Depending on the resolution of these three validations, a policy can be in any of the following six states:

The logic that runs the different validation steps and handles the resulting state of the Policy Life-cycle is depicted in Figure 3. 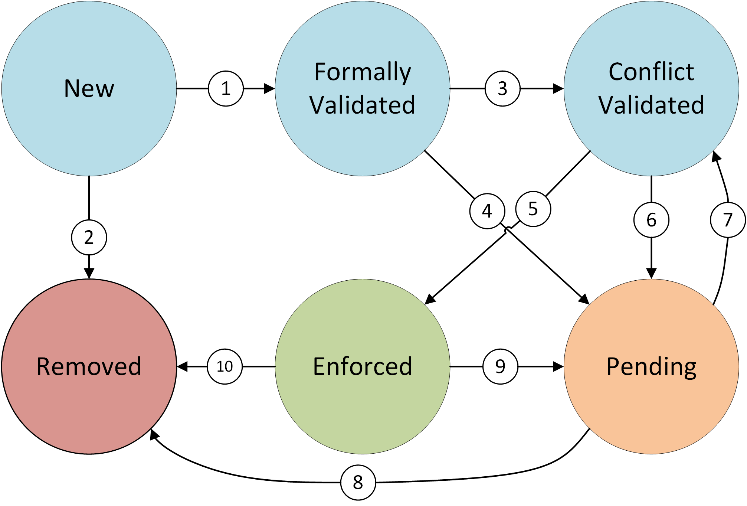 In order to implement and validate the presented policy framework, a prototype has been developed. This prototype follows a modular approach and it is divided into two blocks:

This disaggregation between the PM and the PTs offers two advantages over a monolithic approach (everything as a single ONOS application):

Figure 4 illustrates this design in detail. Both the PM and the PTs expose a REST API, which have different purposes. The former is a Northbound interface, meant for the interaction between the administrator of the system and the PM. This API allows CRUD operations for policy instances. The latter is an internal interface that is used by the PM when the functions implemented in a particular PT have to be called. With this approach, all generic actions/requests (e.g. request for a policy status) can be addressed to the PM, hence simplifying and generalizing the implementation of new policy types. 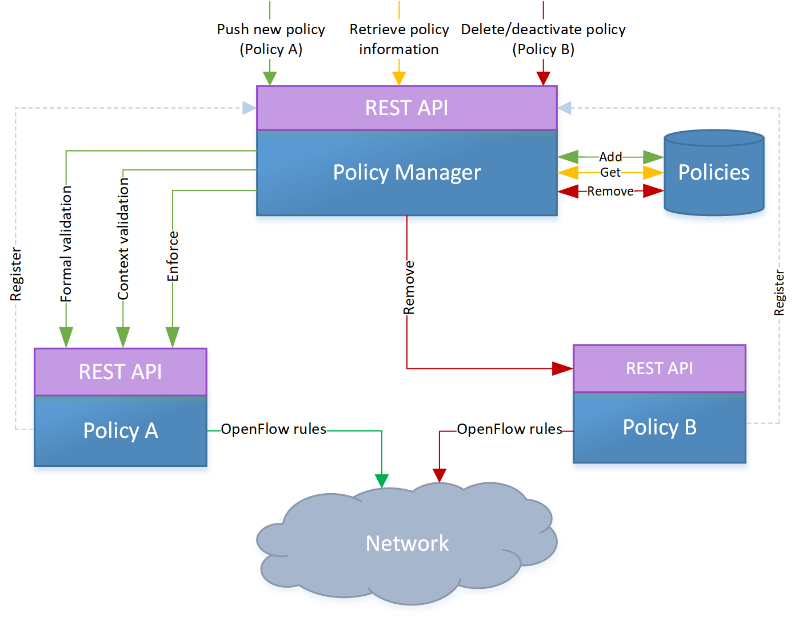 The GET requests are used to retrieve information about the policies installed in the framework and, as mentioned above, do not involve communication with the PTs. The POST request is used to push new policies to the framework in JSON format. Since this requires the validation and enforcement of the policies, this command will trigger POST requests to the REST API of the corresponding PT. Two PUT requests are available. One is used to register a PT in the PM and the other one is used to modify the priority of a policy. This process implies that this policy has to be removed from the network and pushed again with the new priority. For this reason, this endpoint also involves the validation and enforcement of a policy and; thus, the communication with the corresponding PT. Finally, DELETE requests are used to remove or deactivate a policy from the system, or to remove a PT. All of these endpoints return error/success messages. If an error occurs, not only the type of validation error is returned, but also specific details about the error so that it can be easily fixed. 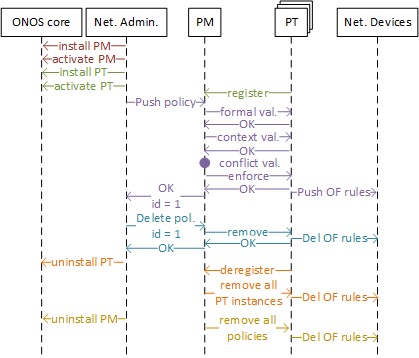 This policy type implements a simple packet-filtering firewall, which allows a network administrator to block traffic that matches a set of specified parameters.

This policy type implements a simple network address translation, which allows a network administrator to specify the address a host will have when communicating with hosts in another network.

This policy allows to control the connectivity between a pair of hosts.

Both the PM and the PTs are installed in ONOS as any other ONOS app. The only requirement is that the PM is previously installed in order to install a PT. Otherwise, a Runtime exception is thrown, as PTs are dependent on libraries/calls implemented in the PM.

Using the Policy Manager is very simple. An administrator just needs to send a REST message to any endpoint.

This JSON represents a Policy Group, where each policy within “policies” is a Policy Rule. For each policy rule, a priority (higher value, higher priority), the type, the form (CNF or DNF), the conditions (as a list of lists understood as CNF or DNF depending on the type) and the actions (as a list) must be provided.

The reply message is another JSON that contains the HTTP response code, a list of the policy ids assigned to the pushed policies, and a list of messages, specifying for each policy the success/error message.

The returned policy id varies depending on three cases:

In order to create a new policy type, an ONOS app with a REST interface has to be created (like steps 4 and 5 of section 3.1.1). Then, in order to integrate it in the Policy Framework and be accessible by the Policy Manager, the following steps have to be performed (the order is not important):

For the new conflict validation method, an endpoint called /rules (POST) has been developed, which given a policy it returns the Forwarding Objectives that would be enforced and a list of the devices where this enforcement would happen.

Note: when installing flow rules in the network it is recommended to install them defining an Application Id based on the policy id (currently the Application ID is defined as “Policy<PolicyID>”). In this way, with the new conflict validation it is possible to know the two flow rules that are conflicting, which Policy id (and, thus, the policy type) they have. Moreover, it also simplifies the remove function, since it is possible to remove all the flow rules with a given Application id, without needing to calculate again which flow rules have to be removed.

Given that some parts of the formal validation are common for all the PTs, a helper class called PolicyHelper in the shared libraries (eu.ngpaas.pmLib) contains useful functions that can be accessed by any PT:

A simple example is in the Connectivity policy, in which a pair of source and destination addresses must be provided. However, this function allows much more complex relations.

A similar work could be done for the Context validation since in most cases it only consists of checking if a host exists or not.