Please be aware that this page is still a work in progress and is subject to changes and needs to be polished. 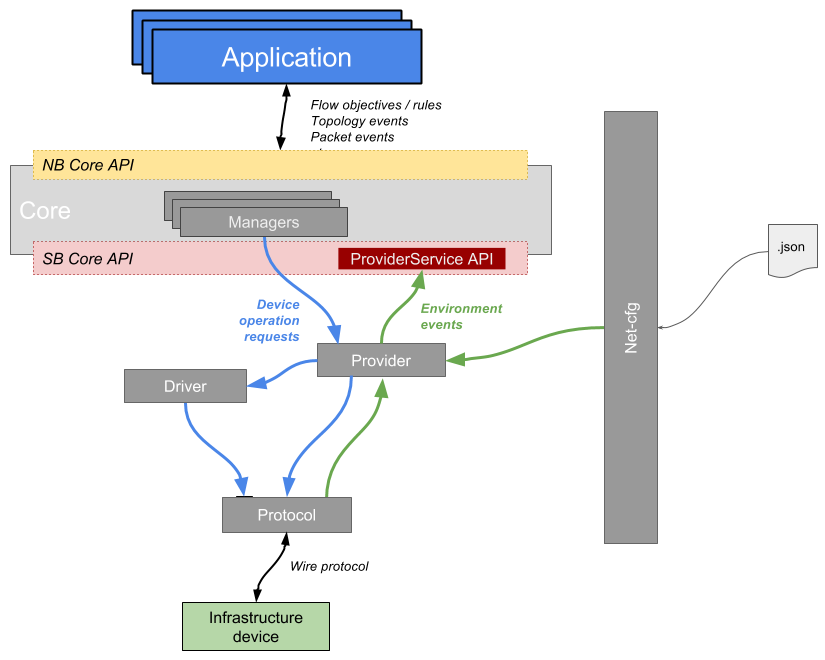 Requests from the core are usually originated from the managers (e.g. the DeviceManager, PacketManager, LinkManager, etc.), while providers can notify the core about events using the ProviderService API.

Providers implementation is used to generalize the logic of operating on a device of a given family, when it comes to actually performing a specific operation on a specific device instance, in order to allow support for different flavors of the same device (e.g. different support of the OpenFlow 1.3 specification), providers can call drivers to abstract the device-specific logic. On the other hand, when dealing with external events, a good practice is to have a server or controller component implemented in the protocol module and have providers register for event listeners. Similarly a provider can register for net-cfg events, so that users or external applications can inject informations using JSON-formatted messages, such as the IP address and port of the control agent of device, links, and so on.

Usually, there exist multiple providers for the same device family, each one devoted to provide control abstractions and environment sensing over physical and logical infrastructure entities, such as devices, links, flow rules, packets, etc. As an example, the following providers can be defined for the same device family (here the complete list of currently available Provider interfaces in ONOS):