This section provides an overview on the XMPP protocol implementation in ONOS. In order to understand XMPP-specific terminology please refer to https://xmpp.org/rfcs/rfc6120.html#streams-fundamentals.

The eXtensible Messaging and Presence Protocol (XMPP) is a general-purpose, universal protocol. The main feature of XMPP is its extensibility and payload-agnosticism, what makes XMPP very powerful and high-level protocol that may carry various information such as routing, configuration or monitoring.

We have made decision to divide Protocols layer into two components: XMPP Controller and XMPP PubSub Controller. Such a decision is due to the nature of XMPP protocol. XMPP may be extended by new XEPs, so that we provide a possibility to build new extensions in future without modyfing already existing implementation. The implementation of core XMPP is provided by XMPP Controller, which is responsible for:

The XMPP PubSub Controller produces notifications, that can be handled by higher layers. The Providers layer includes the XMPP Device Provider and XMPP EVPN Provider. The XMPP Device Provider listens to notification from XMPP Controller and creates a new Device object, when a XMPP session is established. The XMPP EVPN Provider is implemented based on XMPP PubSub Controller. It listens to XMPP PubSub events (SUBSCRIBE, UNSUBSCRIBE, PUBLISH, RETRACT). These messages are handled by Route Provider, which translates PubSub attributes and payload into BGP EVPN constructs, which are provided by RouteService subsystem. The PubSub messages are handled, so that:

The events generated by RouteService are handled by Route Server application. When new event is handled, the Route Server may install a Flow, which is constructed based on BGP Route object and translated into XMPP Event Notification (Message stanza). The Flow installation request is handled by XMPP Flow Provider, which generates XMPP Message stanza based on the Flow object and sends it to the appropriate devices.

As the main use case for XMPP implementation in ONOS, the XMPP-based BGP-signaled End-System IP/VPNs architecture has been implemented. This architecture in general consists of centralized control plane entity called End-System Route Server and distributed vRouters (or VPN Forwarders). For the experiments purposes the XMPP-enabled vRouter emulator (based on Mininet and Open vSwitch) has been implemented (https://github.com/osinstom/vrouter-client-py). It provides basic functionalities of VPN Forwarder such as XMPP communication with server and VXLAN encapsulation.  We have also developed the Route Server application for ONOS providing VPN membership management and BGP route distribution logic, which are the basic functionality of End-System Route Server.

In order to run a simple demo you have to set tup three VMs. We use VirtualBox to provide three VMs on local laptop. It's preferred to create two separate networks between VMs (we use VBox Host-Only Adapter networks):  management network for control plane operations and data network for connecting emulated compute nodes. The lab architecture is presented below: 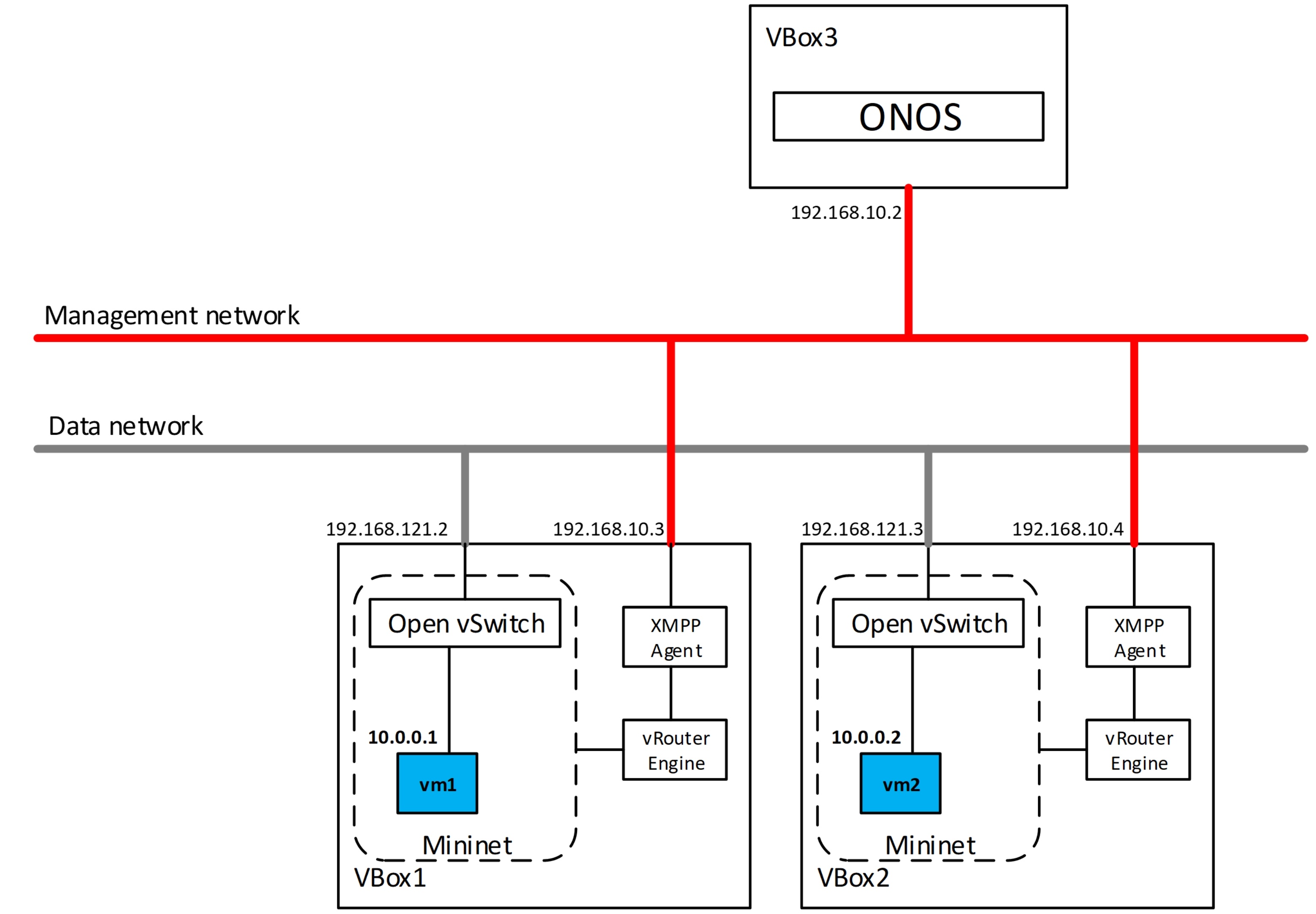 Before running the XMPP clients you should run ONOS controller:

The short demo video is available at:

Presentation with the Technical Steering Team:

This work is licensed under a Creative Commons Attribution-Non Commercial-Share Alike 4.0 International License.