When a fault or event occurs, a NE will typically send a notification to the network operator via SNMP. An alarm is a persistent indication of a fault that clears only when the triggering condition has been resolved. This proposal outlines a solution so that ONOS will provide support for such alarms.

Fault Management is in ONOS terms: a service, i.e. "a unit of functionality that is comprised of multiple components that create a vertical slice through the tiers as a software stack"

Three layers are will be updated to provide the new service:

For context, the following diagram taken from ONOS design wiki, illustrates the relationship between the 3 layers. 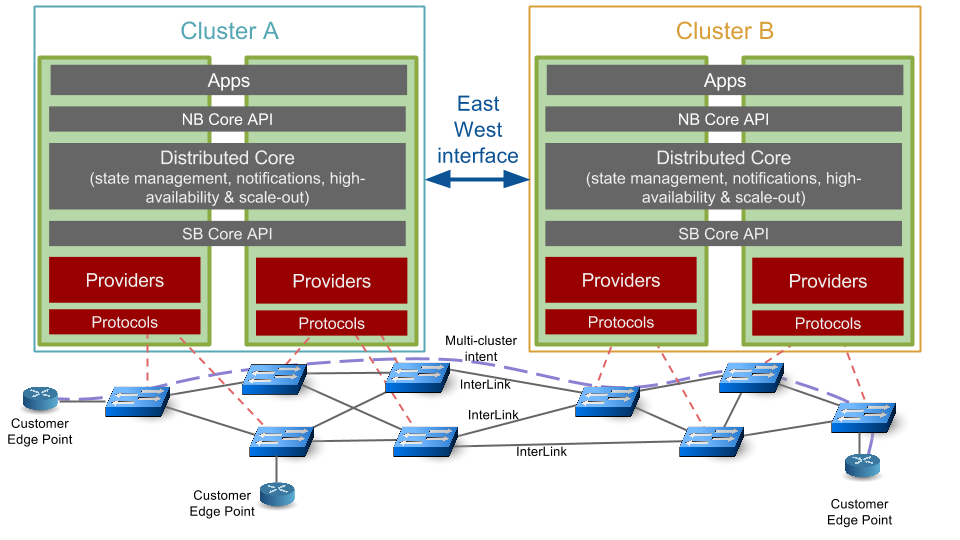 Note: none of following is specific to Fault Management.

The provider has a core based on SNMP4J (Reference #1) At runtime, ONOS uses this, plus additional NE-specific automatically-generated jar libraries to provide a type-safe NE-specific programmatic interface, based on the MIB set for that NE type.

The SNMP provider provides a local cached ‘in-memory’ representation of tables deemed ‘interesting’ on the NE. This set of tables is defined in step #2 below.

Note: trap notifications (whether fault or configuration related) are an optimization: using them ONOS can receive faults before its next poll interval, but polling is the only guaranteed mechanism to have a correct picture of the NEs’ faults - in particular when faults pre-date management by ONOS or when the ONOS or network goes offline temporarily.

A set of standard MIB specific libraries will be supplied by default (allowing SNMP interaction with e.g. MIB-II compliant NEs).

A new ONOS core (Fault Management) will track the state of the NE.

It will register its interest in specific (Fault Management) tables and notifications with the SNMP provider mentioned above, which will inform core about relevant events. This layer understands for a particular NE the MIB/Vendor-specific mappings from fault tables and fault notifications.

The north-facing API of the FM core will provide a mechanism for applications to get current alarms, for either a specified single NE or for all NEs.  It will also provide a way for an application to register to be notified about alarm-state changes.

It will include ‘recently cleared’ alarms but these will get purged regularly.  A NE will also have its alarms purged if it is deleted from ONOS i.e. undiscovered.

The persisted alarms model is as follows:

A future FM release may support persisting faults over longer timeframes (including those related to NEs that are no longer managed) so that historical data is made available. Support for historical data mining is excluded from this release.

Applications using FM will be supplied with following functionality:

There are many resources online giving overview and definitions for fault management. We will use same definitions as the IETF Alarm MIB RFC 3877; whilst do not want to repeat that document the following extract may be a helpful.

Other terminology used in this proposal:

1.     http://www.snmp4j.org/ SNMP4J is an enterprise class free open source and state-of-the-art SNMP implementation for Java™ SE 1.4 or later*. SNMP4J supports command generation (managers) as well as command responding (agents). Its clean object oriented design is inspired by SNMP++, which is a well-known SNMPv1/v2c/v3 API for C++