The Owl release (1.14) features a new architecture which physically decouples cluster management, service discovery, and persistent data storage from the ONOS nodes themselves. These functions are now the responsibility of a separate Atomix cluster. The new ONOS/Atomix architecture, however, introduces several breaking changes to the way clusters are configured and managed and requires additional setup and configuration steps. This guide will explain how to configure Atomix and ONOS in production.

Note: When running ONOS in local mode in 1.14 (for testing and development), Atomix is still embedded inside the ONOS node. No additional configuration step is required.

In order to understand how the cluster is configured in ONOS 1.14, it's important first to understand how it is architected. In past versions, ONOS embedded Atomix nodes to form Raft clusters, replicate state, and coordinate state changes. In ONOS 1.14, that functionality is moved into a separate Atomix cluster:

Prior to bootstrapping the ONOS cluster, an Atomix cluster must first be formed for data storage and coordination. ONOS nodes are then configured with a list of Atomix nodes to which to connect.

The Atomix distribution can be downloaded from the downloads page on atomix.io or from Maven Central directly and is provided in either tar or zip format.

The Atomix distribution is laid out as follows:

Atomix Docker images are tagged with the Atomix version number. Note, however, that the latest tag is currently reserved for the latest Atomix snapshot and may be incompatible with ONOS 1.14. Ensure you pull a version tag.

To run the Atomix Docker image, create an Atomix configuration in a dedicated directory:

Atomix supports merging multiple configuration files together, so when providing a custom configuration to the Docker image, the --ignore-resources flag must be enabled to avoid picking up the atomix.conf included with the image/distribution.

To preserve data across restarts, you may also want to mount a data directory. To do so, mount the data directory and pass a --data-dir to the container:

With an external data directory specified, the container can be destroyed and recreated without losing state. This is a critical requirement of production systems.

A minimal Atomix configuration for ONOS will include a single Raft management partition plus a Raft partition group.

The node specified in the cluster configuration is an optional field. To share the configuration file among multiple Atomix nodes, the local node information can instead be passed as arguments to the Atomix agent:

The cluster configuration specifies a node discovery protocol that relies on a static membership list to form a cluster. The nodes provided to the discovery protocol are the set of all Atomix nodes. Note that ONOS nodes do not need to be listed here since ONOS connects to Atomix in a client-server architecture. The address field for each node is a host:port tuple which includes support for DNS. Additional discovery protocols exist and are documented in the Atomix documentation. However, the bootstrap protocol is recommended for consensus nodes since fixed node identities are a requirement of the Raft protocol regardless.

The management-group defines the protocol and configuration to use for managing the Atomix cluster. Since ONOS relies heavily on Atomix for consensus, this must be a Raft partition group. The management group may be configured with only a single partition as the load on the group is low.

The partition-groups configuration defines a set of named partition groups for storing distributed primitives. Again, ONOS expects a single Raft partition group to be configured. The group can be named with any name and can include any number of partitions. We recommend the partitions to be set to 1 or 2 times the number of Atomix nodes.

The second part of the ONOS cluster configuration is the ONOS configuration itself. In past releases, the cluster has been configured either using cluster.json or by running the onos-form-cluster script. The Owl release preserves cluster.json but no longer supports onos-form-cluster. However, the format of cluster.json has changed to accommodate changes in communication patterns within the ONOS and Atomix clusters. In past releases, ONOS nodes formed a cluster by communicating with one another to elect leaders using the Raft protocol. As a consensus protocol, Raft required strict cluster membership information to preserve consistency while forming the cluster by counting votes. But since the Raft protocol is moved to Atomix in ONOS 1.14, the ONOS cluster itself no longer has any such strict requirement for cluster membership. In other words, an ONOS node can now discover its peers using dynamic discovery mechanisms, and the ONOS cluster as a whole can tolerate the failure of all but one node. This is done by discovering ONOS nodes through the Atomix cluster: 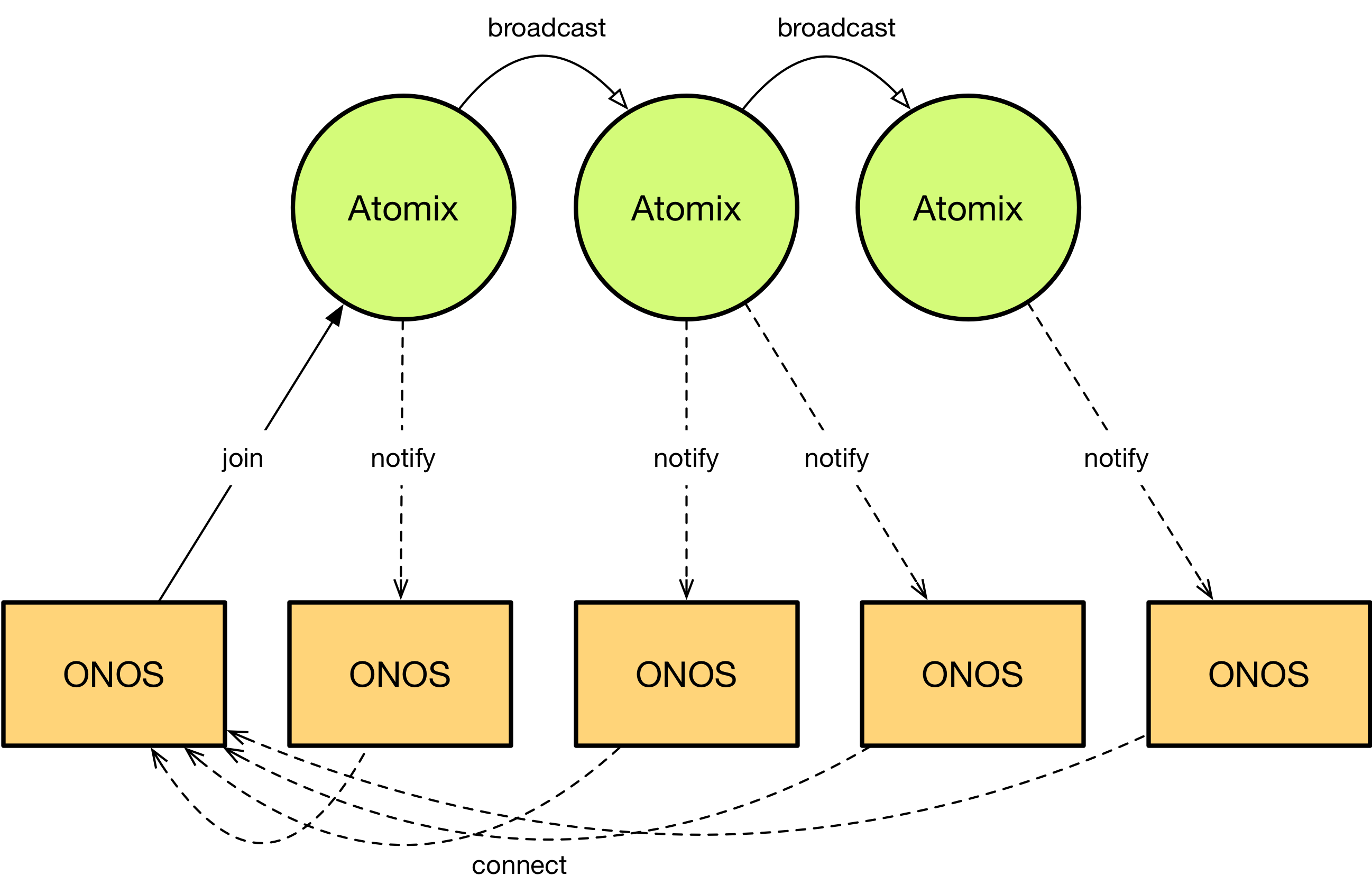 When an ONOS node is bootstrapped, it connects to the external Atomix cluster for data storage and coordination. Upon connecting, the ONOS node notifies Atomix of its existence and location. Atomix then broadcasts the new node's information to all other connected ONOS nodes, and connected ONOS nodes subsequently connect directly back to the new ONOS node for peer-to-peer communication. This allows ONOS nodes to dynamically discover one another while still preserving the same performance characteristics as in past releases.

But the introduction of service discovery for the ONOS controller changes its cluster configuration. In past releases, cluster.json was used to list each ONOS node's peers and the distribution of Raft partitions in the cluster. But ONOS nodes now have no knowledge of their peers or the available storage partitions. Instead, ONOS nodes need only be configured to locate and connect to Atomix to discover each other and store state.

To facilitate the new cluster architecture, the format of cluster.json is changed to list the set of Atomix nodes rather than the set of ONOS nodes. This is done by listing the nodes in the storage field:

To configure the ONOS cluster, place the cluster.json file in the /config directory under the ONOS root.

The format is the same as the format for the nodes field in past releases, but the listed IP/port combinations are for Atomix nodes rather than ONOS nodes. In addition to support for IP addresses, ONOS 1.14.1 introduced support for hostnames via the host field:

In past releases, ONOS nodes could be assigned human readable identifiers. In order to facilitate this in the Owl release, we added an additional node field to describe the local node.