This section describes the function and structure of the Device subsystem, including a detailed look at the OpenFlow facilities.

The Device subsystem is responsible for discovering and tracking the devices that comprise the network, and for enabling operators and applications to control them. Most of ONOS's core subsystems rely on the the Device and Port model objects created and managed by this subsystem, and/or its provider for interacting with the network.

This section focuses on the aptly named OpenFlowDeviceProvider, used by ONOS to interact with OpenFlow networks. The OpticalConfigProvider, used to read in network configurations for optical networks, will be described as part of the [Packet Optical use case].

Recall that ONOS represents various network components and properties as protocol-agnostic model objects at the core tier, and as protocol-specific objects at the provider tier. The following are the major representations translated across the two tiers:

The following figure summarizes the organization of this southbound. 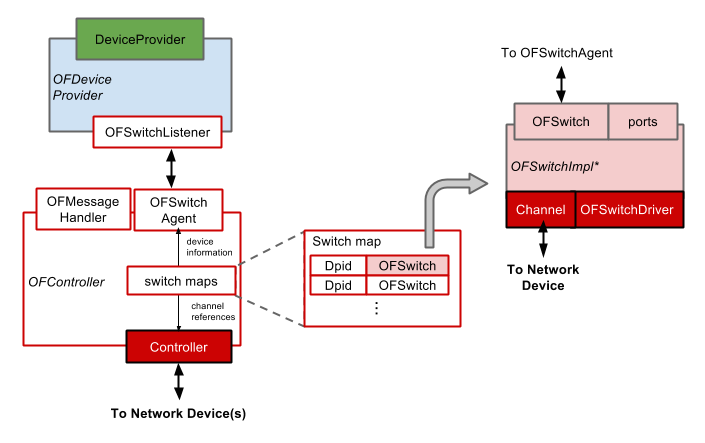 Note: "OF" is shorthand for "OpenFlow". For example, the actual name of OFSwitch above is OpenFlowSwitch.
Exceptions will be noted when they crop up.

Not shown above are how there are (currently) three switch maps for Switch objects in various states,
and the entry points for the other subsystems.

The blue and green blocks correspond to the Provider Component and Provider in the figure under Subsystem Structure. The red and pink blocks and those with red outlines represent the constituents of the red block labeled 'Protocols' in the same figure(Subsystem Structure). The red and pink blocks highlight the components that directly play a role in communicating with the infrastructure via TCP connections.

The OpenFlow functions are orchestrated through the OpenFlowController (OFController in the above figure). This component stores mapping of switch DPID to references to OpenFlowSwitch objects, and generates OpenFlow events that listeners (providers) may subscribe to. Providers may subscribe as one or more of the following listeners:

The OpenFlowController is also responsible for establishing, and managing the communication channels for each of the Switch objects that it learns about. Connections are established by the Controller, and the state of each connected switch is kept track of by the OpenFlowSwitchAgent. Specifically, Controller associates a TCP OpenFlow channel (the OFChannelHandler, currently in Netty) to an incoming connection by creating a Switch object with a reference to the TCP connection (labeled "Channel" above).

The OpenFlow Switch object is the OpenFlow subsystem's representation of a network device, complete with a set of ports, unique identifier, device information, and a channel reference to the actual device connected on the other side. It is a composite of multiple interfaces, implemented as a series of OFSwitchImpl* classes. Each such implementation represents a type of OpenFlow-capable switch; for example, OFSwitchImplOVS10 is a representation of an OpenVSwitch supporting OpenFlow 1.0. A single instance of a Switch object represents a single OpenFlow connection from the network.

A Switch object has two types of interfaces:

In general, the first interface allows providers (and indirectly, the rest of ONOS) to interact with the Switch object, and second interface deals with the details of the protocol that require (or should have) little or no intervention from the rest of the system. These include parts of the OpenFlow handshake unique to various types of switch, and certain forms of sanity checking of incoming/outgoing messages.

Switch objects are associated with several types of states. Each state has a set of behaviors associated with it, e.g. the types of control messages that a Switch expects to receive or send. Two of the primary states tied to a Switch are its Channel State, and the ONOS instance's role.

The OFChannelHandler implements the channel state FSM in the ChannelState Enum. Each enum value represents the various points in the OpenFlow handshake. The following flowchart represents this FSM.

The state transitions for this FSM are driven by the reception of various OpenFlow messages during the handshake, which are defined in the OpenFlow specifications. Driver-specific aspects of the handshake, such as the exchange of barrier messages by some 1.3 switches, are implemented per OFSwitchImpl* class for the specific type of switch.

The role of an ONOS instance describes its read and write permission regarding a Switch object. In the multi-instance setting, one ONOS instance will be a Master with full control over the network switch, and the rest will be Equals only capable of reading state information from a network switch. The roles are enforced both at the OpenFlowSwitchDriver level by the RoleManager (not shown), and at a protocol-neutral level by the Cluster Subsystem.