This section describes the environment used for the testing and development of the packet optical use case, using the environment for the Packet Optical Tutorial as the example. In specific, it will outline the steps and components needed to install and run the software required to emulate a packet/optical network, and the ONOS instance(s) used to control them. 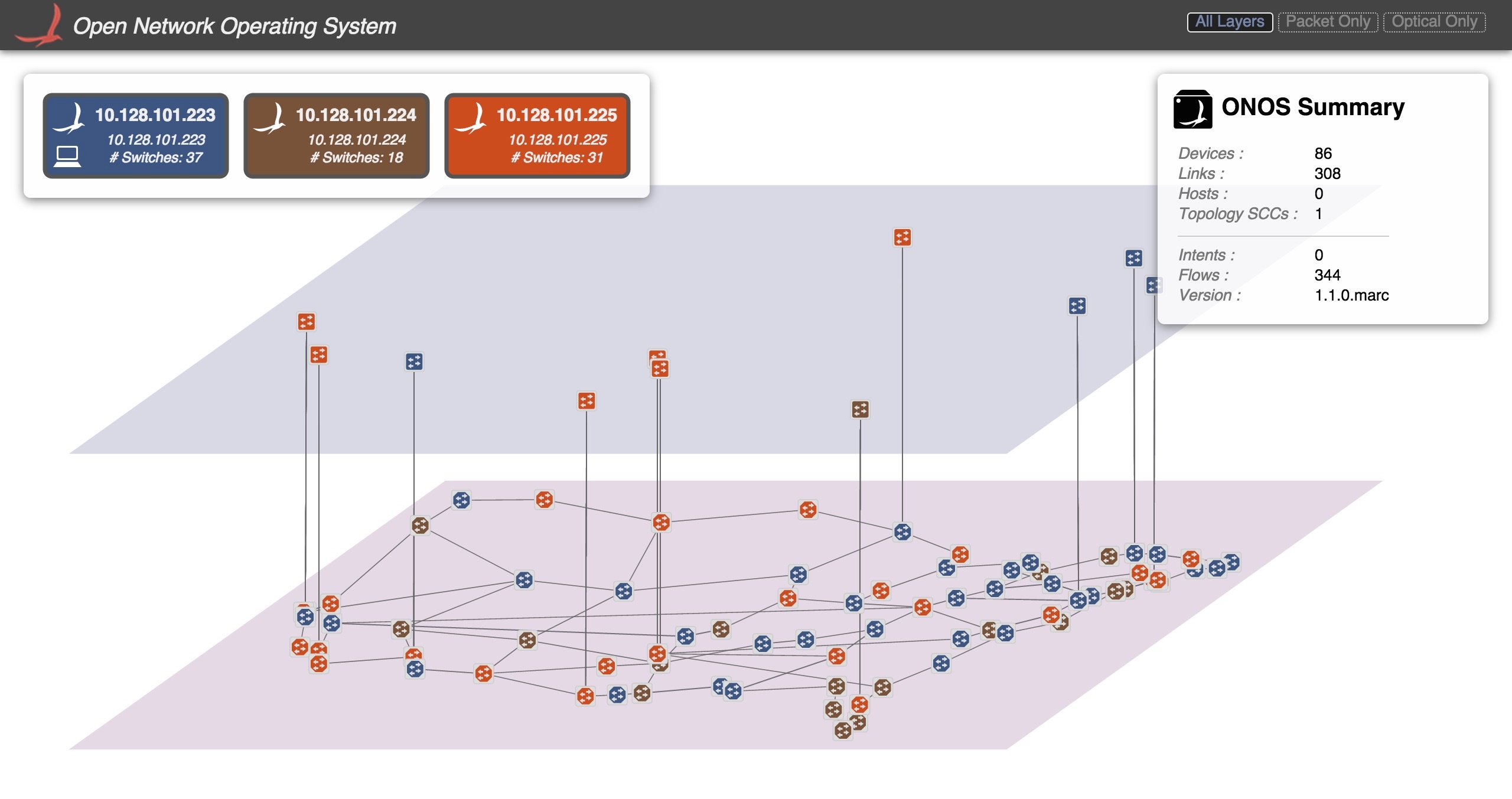 One of the key drivers for this use case is that network designers can spin up a relatively large emulated packet-optical network on their personal computer, and develop applications without relying on a hardware optical network, which may be expensive and/or difficult to come by.

Mininet is the emulation tool that will create all network switches, links, and hosts. The forwarding behavior of the switches is controlled by ONOS using the OpenFlow protocol. The packet switches are based on Open vSwitch and use OpenFlow 1.0, while the optical switches rely on LINC-OE and use OpenFlow 1.3 (with vendor extensions as defined by the Optical Transport Working Group in ONF).

The following are the necessary steps to install the required software to emulate a multi-domain network as described above. The setup assumed here is:

A common way to realize the above is to host the Mininet and ONOS hosts as VM (or container) guests on the deployment host. The minimum requirement is that all hosts above be able to communicate with one another, and have Internet connectivity.

The steps here are based on the instructions for installing Mininet natively found here. These instructions assume that the Mininet host runs Ubuntu 14.04, x86_64, and a user:password of mininet:mininet has been set up.

Step 1 applies to both deployment and ONOS hosts. The rest only apply to the deployment host.

If, for some reason, the script fails to inject the optical topology in ONOS, onos-topo-cfg can be used to manually push the topology file generated by the script:

If you get 404 responses back, you should check that you have onos-rest (not to be confused with onlab-rest) loaded as well.

At this point, the topology should be viewable by pointing a browser to the ONOS GUI at

It should also be possible to run through the demos described in the Packet Optical Tutorial.

Here are some notes on the various components that may be used in this environment, that didn't fit anywhere.

The Mininet scripts used for emulating multiplayer networks rely on a library called opticalUtils.py under ${ONOS_ROOT}/tools/test/topos/ . This library contains functions that allow Mininet to interact with Linc-OE, and to create and manipulate Linc-OE switches and links like any of its other emulated network device types. As part of building up the Linc-OE-based topology, this script also generates a topology file called Topology.json that describes the optical topology. This file is pushed to the ONOS instance(s) to supply it with connectivity information that isn't discoverable through the optical portions of the network.

In the LINC console, the following commands are available. Please note that Erlang is very picky regarding syntax, so make sure you are not missing any spaces or the dot ('.') at the end of each command!

The CO fabric is emulated with CpQD software switches, since OpenvSwitch doesn't support some features needed by the fabric.

Under certain conditions, CpQD nodes may fail silently, removing its UNIX socket file(s) from /tmp/ and becoming unresponsive. For a node named leaf101, the files are named leaf101 and leaf101.listen, the former being the control channel socket, the latter, the datapath listen socket.

Attaching to a CpQD port with tcpdump seems to increase the chance of silent failure. Therefore it seems best to monitor CpQD nodes from its logging system, by piping debug output for its packet processing modules to i.e. syslog:

(TODO: re-identify which module we want. The list is here.)

Running the BGP router application requires you to configure and run a local BGP speaker (e.g., Quagga). To eliminate this, we created the option to inject static routes directly into the app.

First, deactivate the running BGP router application, and its router component. The order is important here, unless you like exceptions in your logs.

Then activate the static router component, after which you can reactivate the BGP router app. Again, note the order.

From now on, you can inject static routes into ONOS as follows. The arguments to the add-route call are (1) the routing prefix, (2) the next hop's IP, and (3) the next hop's MAC address. For instance:

Be careful though, as the static router component currently does not implement the full RoutingService interface. This means that, for instance, the routes command will not work.