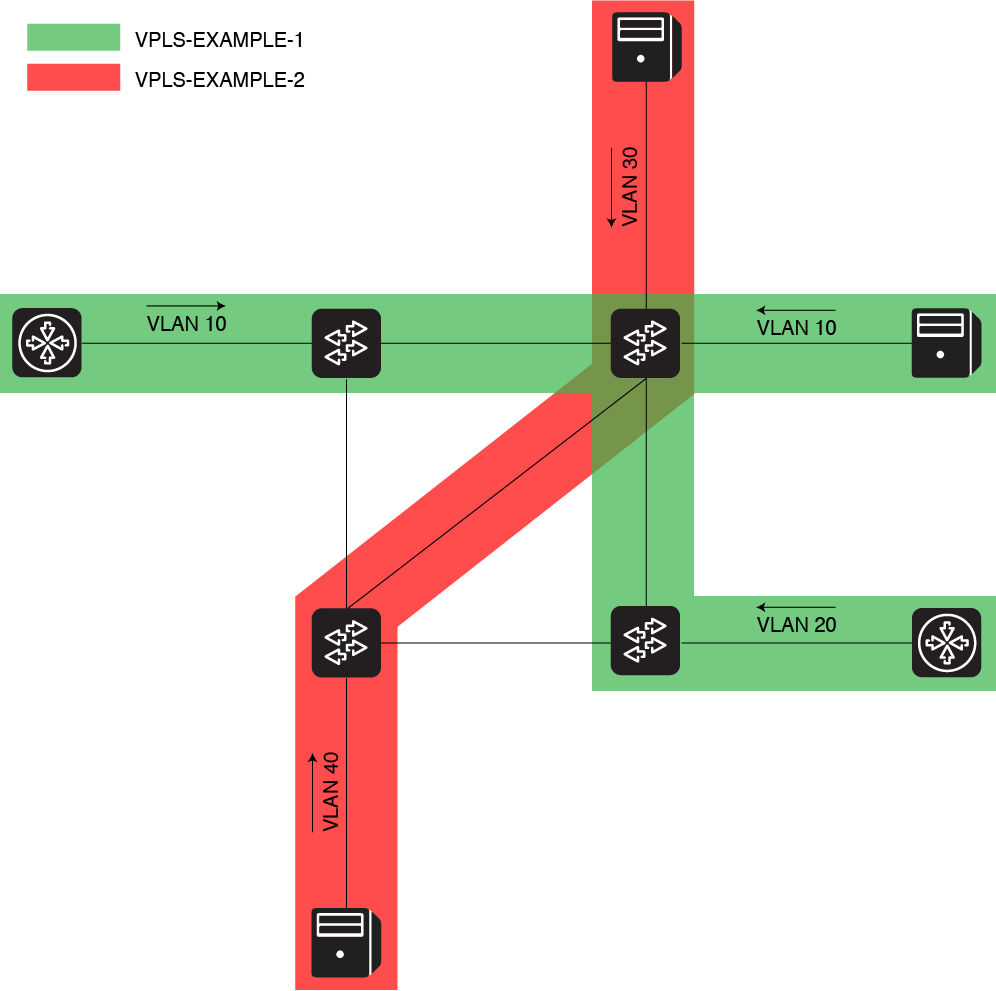 When conditions 1, 2 and 3 are satisfied, hosts attached to the VPLS will be able to send and receive broadcast traffic (i.e. ARP request messages). This is needed to make sure that all hosts get discovered properly, before establishing unicast communication.

When 4 gets satisfied -meaning that ONOS discovers at least two hosts of the same VPLS- unicast communication is established. 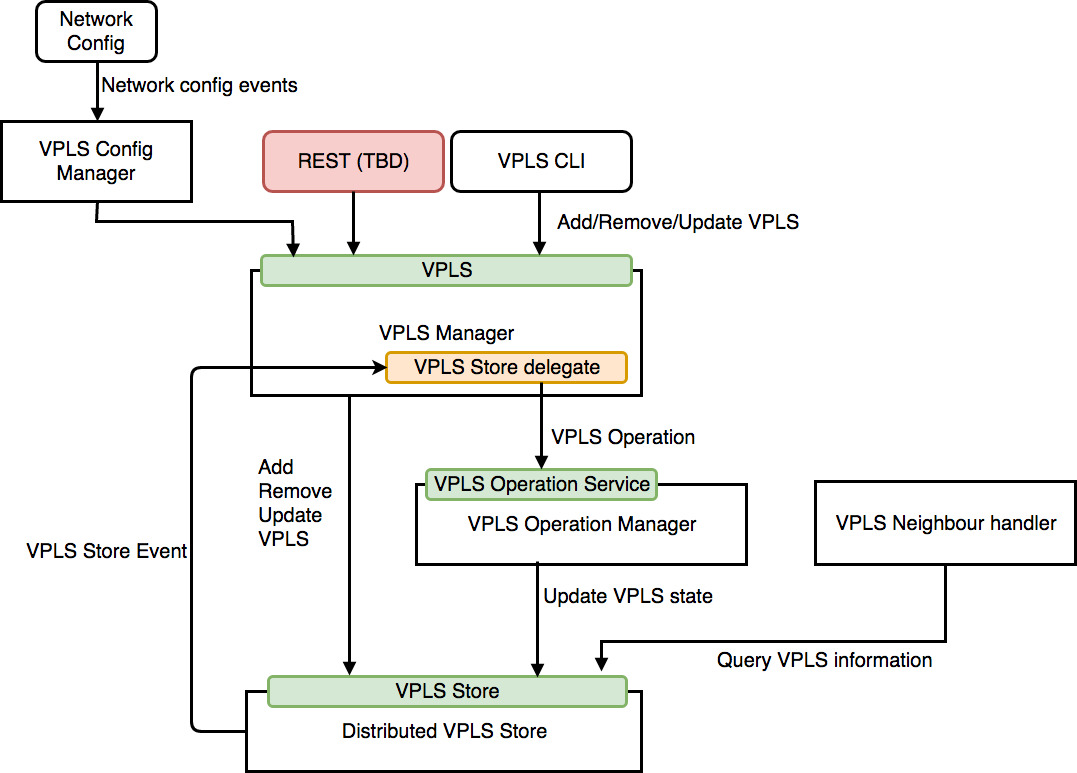 VPLS can be changed by these ways: 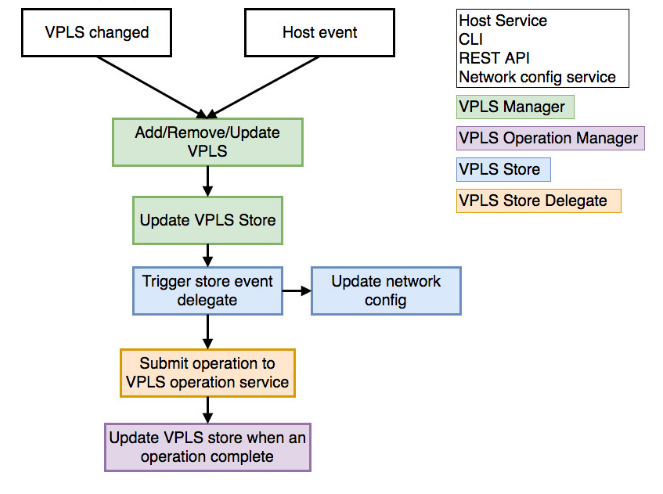 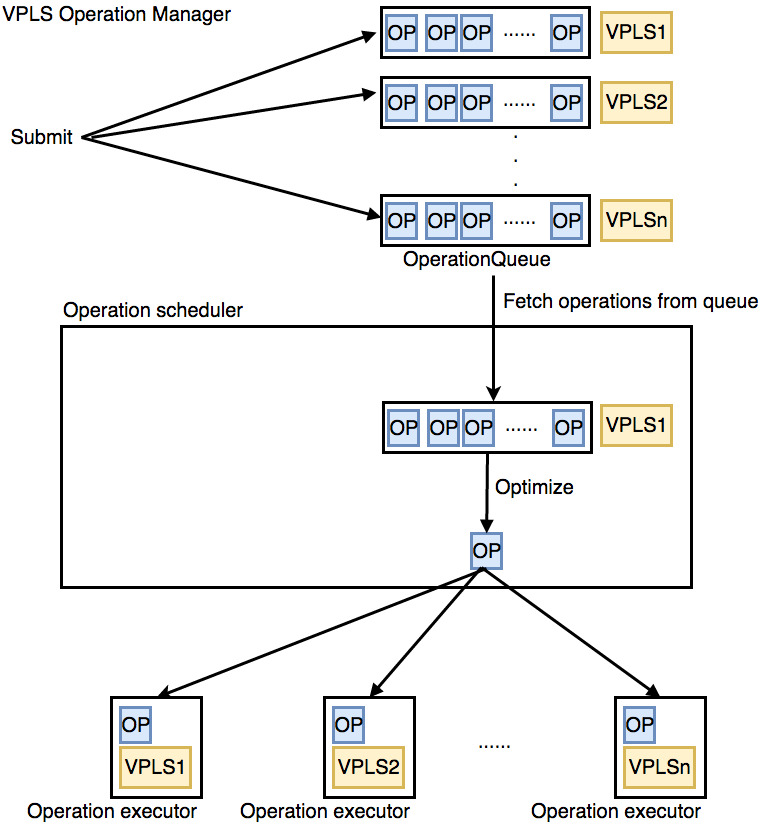 For ADD operation, executor will generate two types of Intents:

For REMOVE operation, the executor will find every intents related to the VPLS (by Intent key) and remove them.

For UPDATE operation, two situation will be considered:

An IntentCompleter is a kind of IntentListener, initialize by Intent keys we need to wait, then register as listener to the IntentService and do Intent operations (submit, withdraw)

After that, invoke “complete” method from the IntentCompleter, it will wait until all Intents finished or timeout exceed. 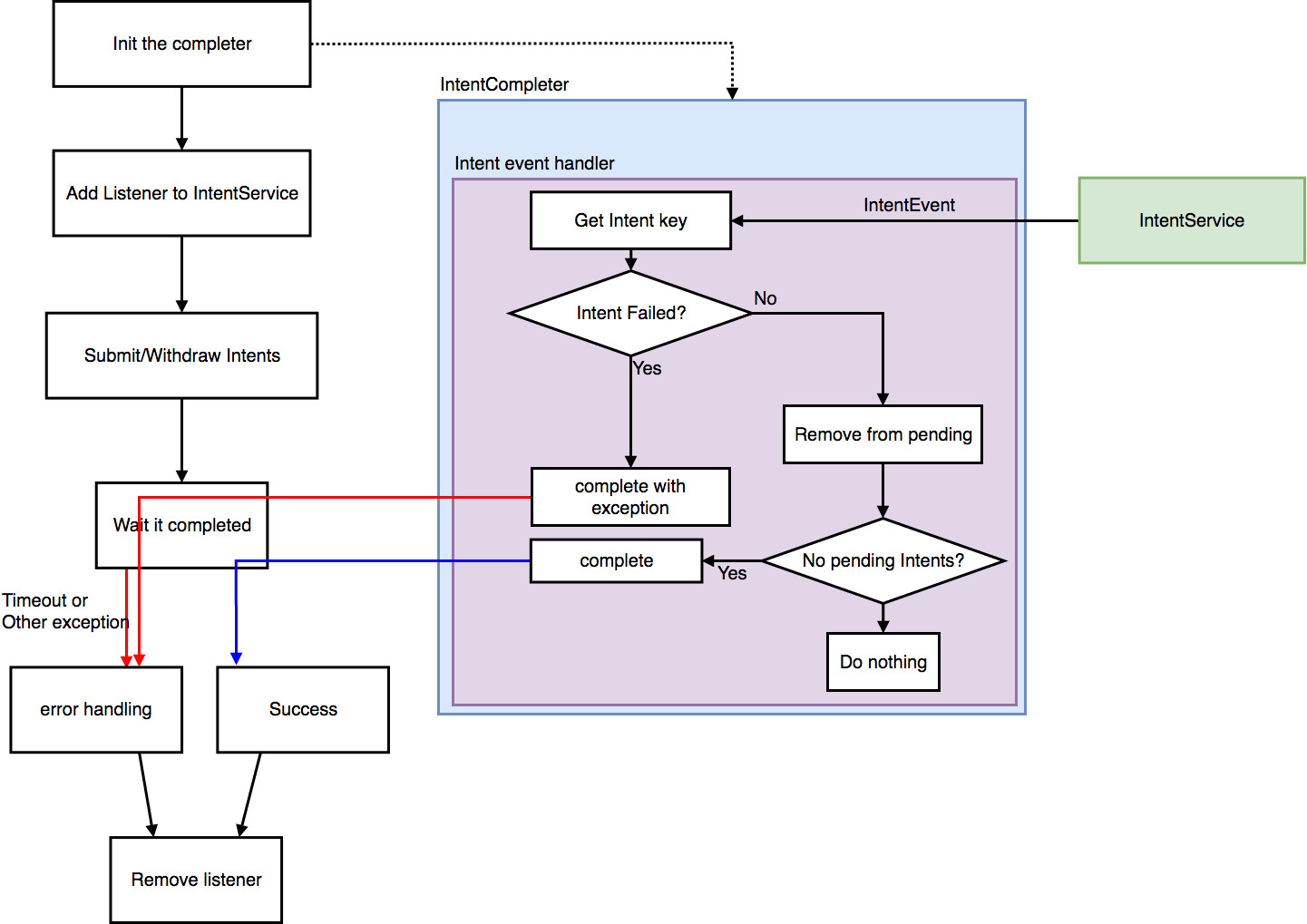 The Intent Framework is used to provision both broadcast and unicast connectivity between the edge ports of the OpenFlow network, where hosts are attached to. Using the intent framework abstraction allows to mask the complexity of provisioning single flows on each switch and do error recovering in case failures happen.

Assuming N edge ports have interfaces associated to the same VPLS, N single-point to multi-point intents for broadcast will be installed. 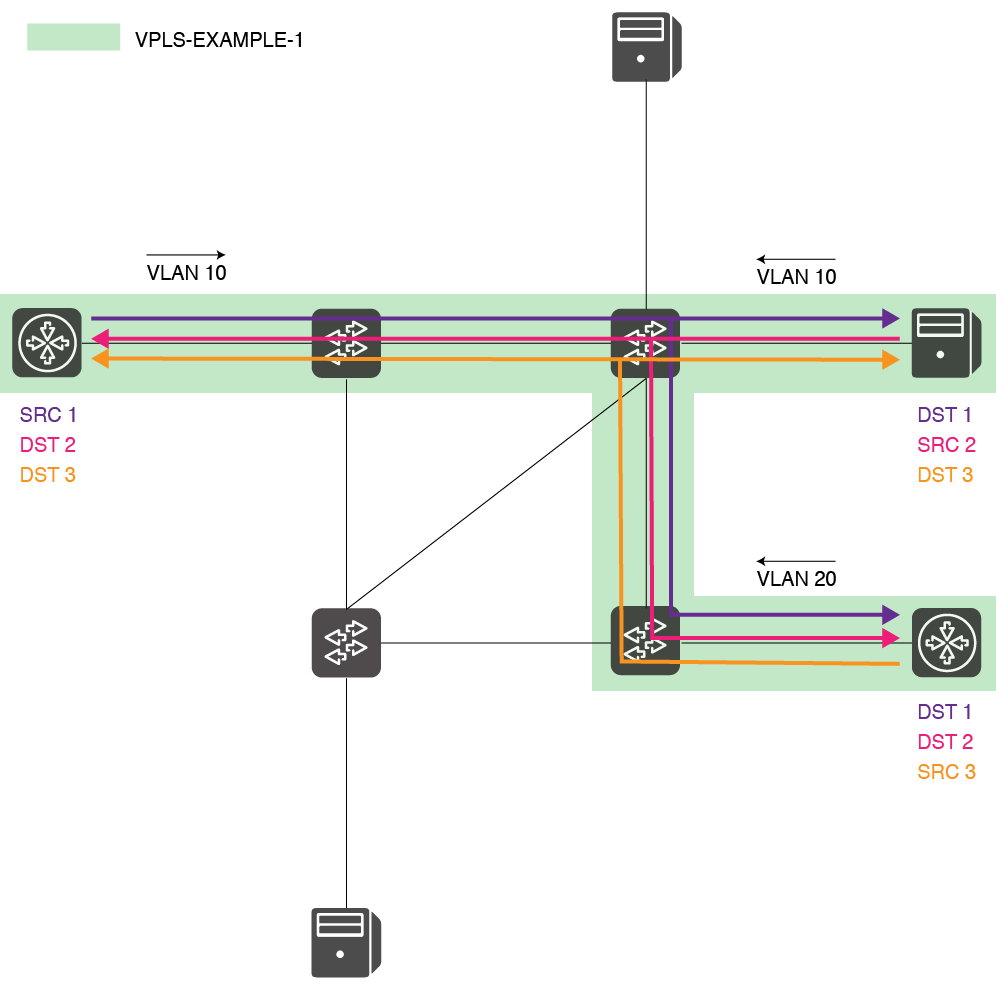 Intents for Broadcast traffic get generated, regardless the hosts have been discovered or not. This is done since often hosts won’t be able to send traffic into the network (so get discovered by the Host Service) before ARP requests reach them and they reply to them with an ARP reply.

Assuming N edge ports have interfaces associated to the same VPLS, N multi-point to single-point intents for unicast will be installed. 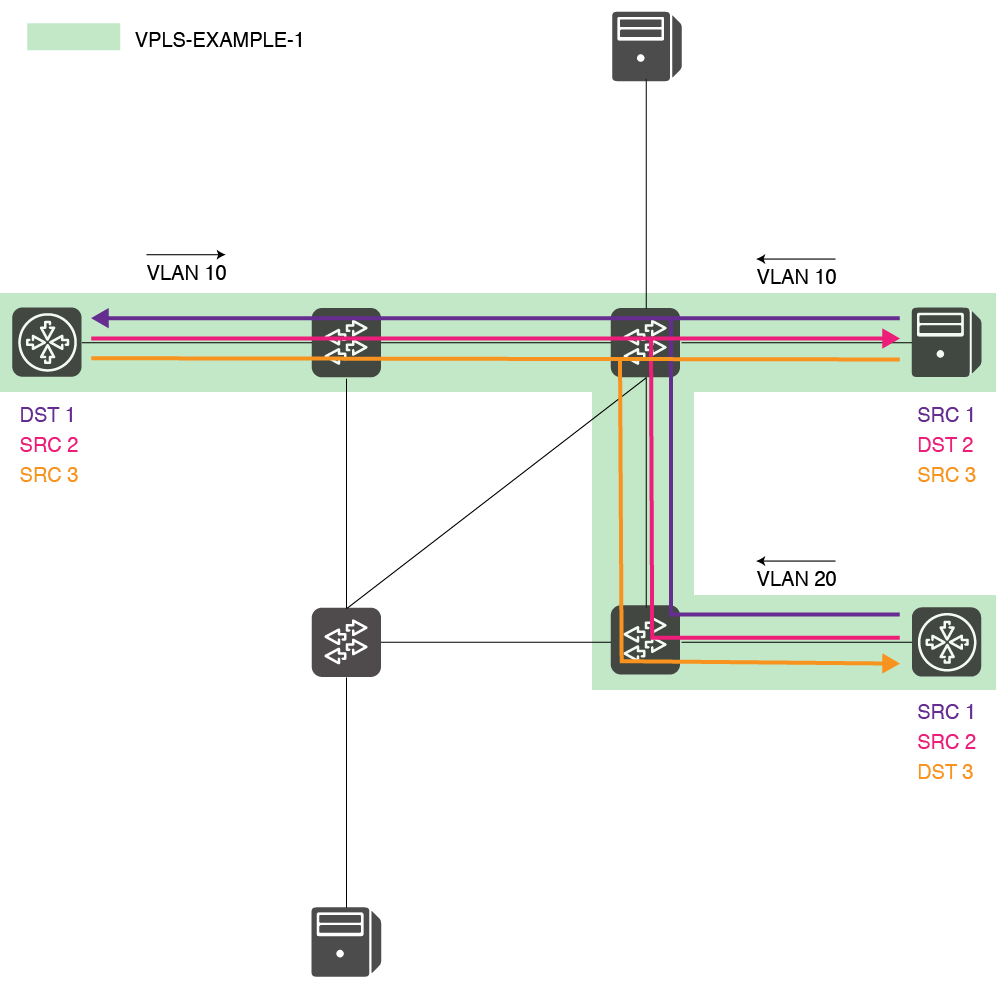 Intents for Unicast traffic get generated only if:

The reason for the second condition is that intents for unicast (see above) match on the MAC address of the hosts connected, which is doesn’t get configured by the operator, but instead provided by the host service after the host gets discovered.

VPLS runs on top of ONOS as a distributed application. VPLS applications share their status and use common data structures. ONOS makes sure they remain in synch.

At the beginning, the VPLS operation manager from each ONOS instance will send a request to LeadershipService to make sure which instance is the leader of VPLS application.

Only the leader node can execute VPLS operation and install Intents now.

At the current stage: