It is important for the switch and the controller to have the same (abstract) view of the switch-forwarding pipeline. This view is essentially a Table-Typed-Pipeline (TTP), the framework for which is being developed by the Forwarding Abstractions WG at the ONF. The abstract pipeline used for Segment Routing application is illustrated below, and ‘implicitly’ understood by the switch and controller instances. In addition, the view will be exposed by the OpenFlow switch agent via messages such as Table-Features, Switch-Features and Group-Features.  It is intended that the SPRING-OPEN pipeline, while being table-typed, is still generic enough to be implemented by several different vendor ASICs, on different switch platforms. Under-the-hood, vendors can choose different implementation-specific ways to create and maintain the SPRING-OPEN hardware abstraction.  NOTE: Table IDs depicted in the picture may vary based on the specific switch implementations. 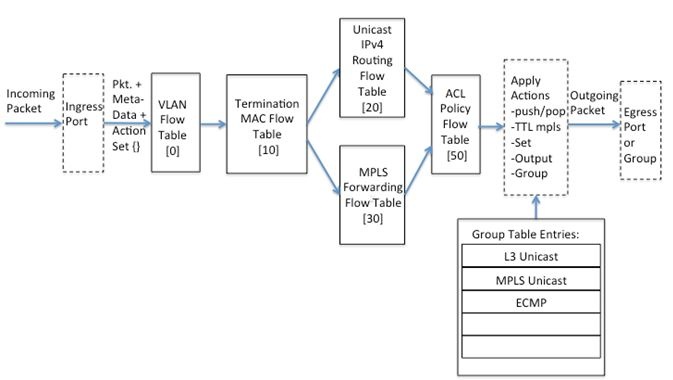 Highlights of the pipeline shown in above figure are as follows:

So when the switches are connected and if they are configured of Segment Router type, the Segment Router driver would populate at startup during the OF handshake procedures the SPRING-OPEN pipeline in those switches for which this ONOS instance is performing MASTER roleFor more details see the latest version of the SPRING-OPEN Hardware Abstraction.

The following figure illustrates the Segment Routing application components, and the relationship among those components